Karl Grabe was the backbone behind our ‘Changing Face of Cork City’ photography exhibition. We are delighted he could write this blog for us all about how his love of photography began, and some stories behind his photographs of Cork in the 1980’s. To see more of Karl’s images along with many more pop in to our Changing Face of Cork City exhibition. It is FREE and runs until the 31st of August! 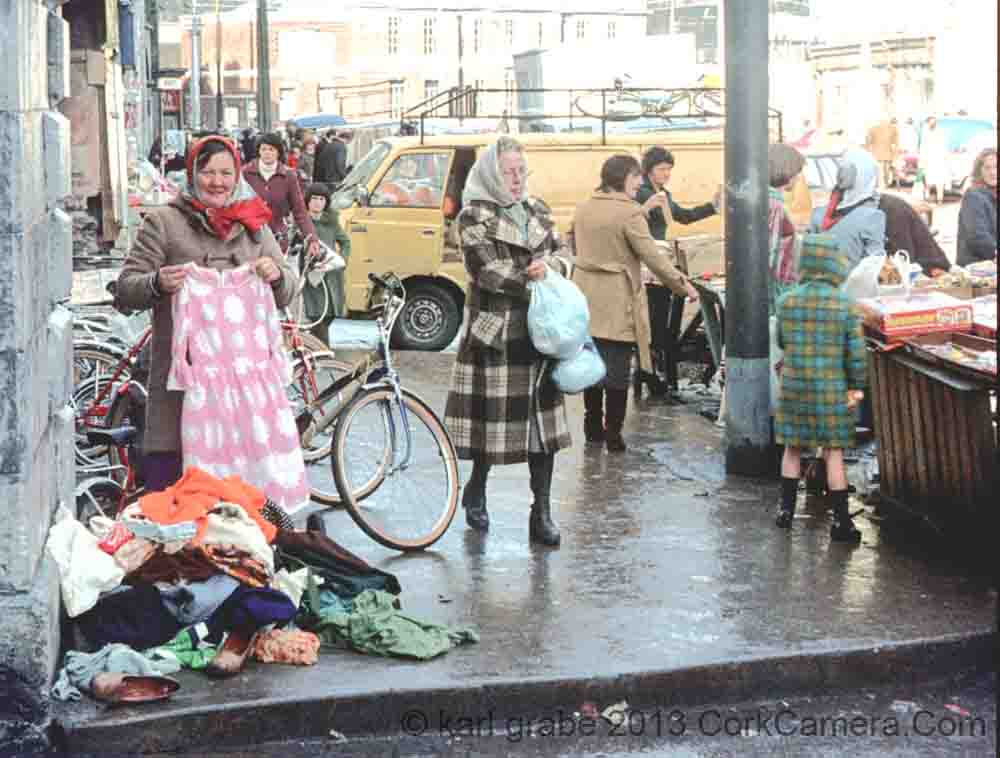 My father was a keen photographer when I was growing up. He also took colour cine films from 1964 and thankfully all these films have survived, there are some clips of Cork at CorkCam.com. He is probably the reason I became so interested in photography while I was still going to school.

I’ve been taking pictures since I was 12 when I bought my First Camera. It was a “Diana” plastic toy camera, even the lens was made of plastic! It didn’t take great photos but it was great fun in a time when very few people had cameras. 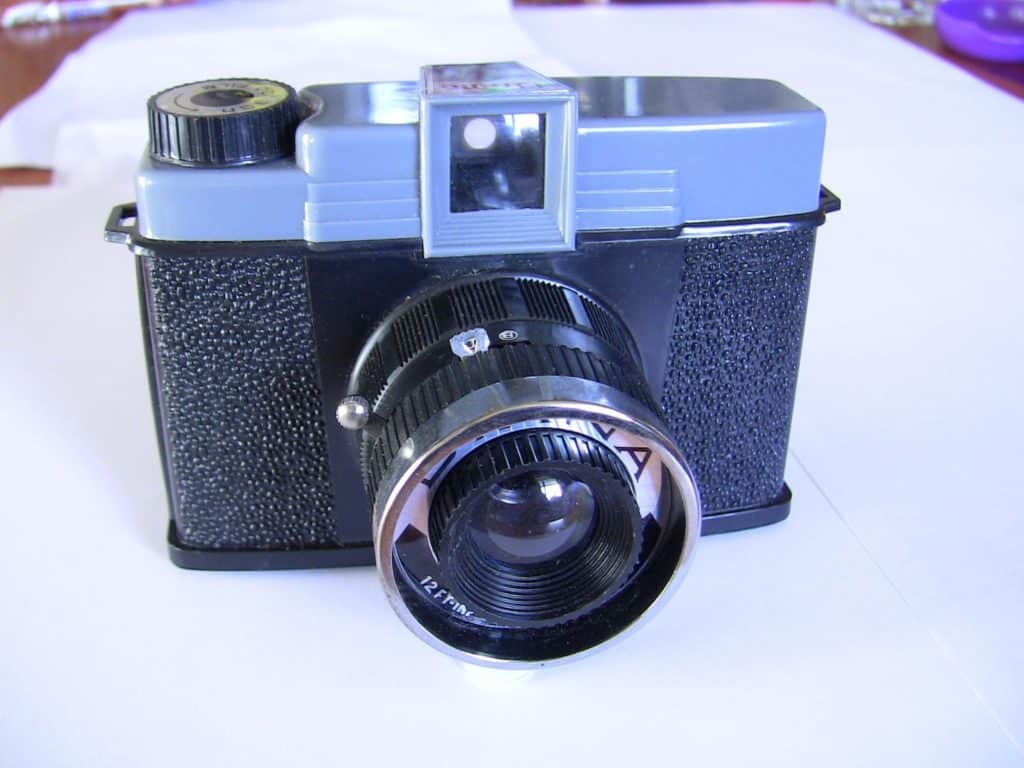 It cost 10 Shillings in Lehan’s grocery shop on Rossa Ave (now Centra) in Bishopstown. It used 120 roll films which I got in the chemist shop on Uam Var Avenue. The kind man in his white coat showed my how to insert the film and wind it on after taking a photo. The camera could take 16 black & white photos and I remember, when I brought the film back to the chemist, the cost of processing the film cost more than the camera itself! Straight out of the chemist I took my first photo in 1969 of Uam Var Avenue. The sheds in the photo probably belonged to the builders as the houses in the estate were still being built. 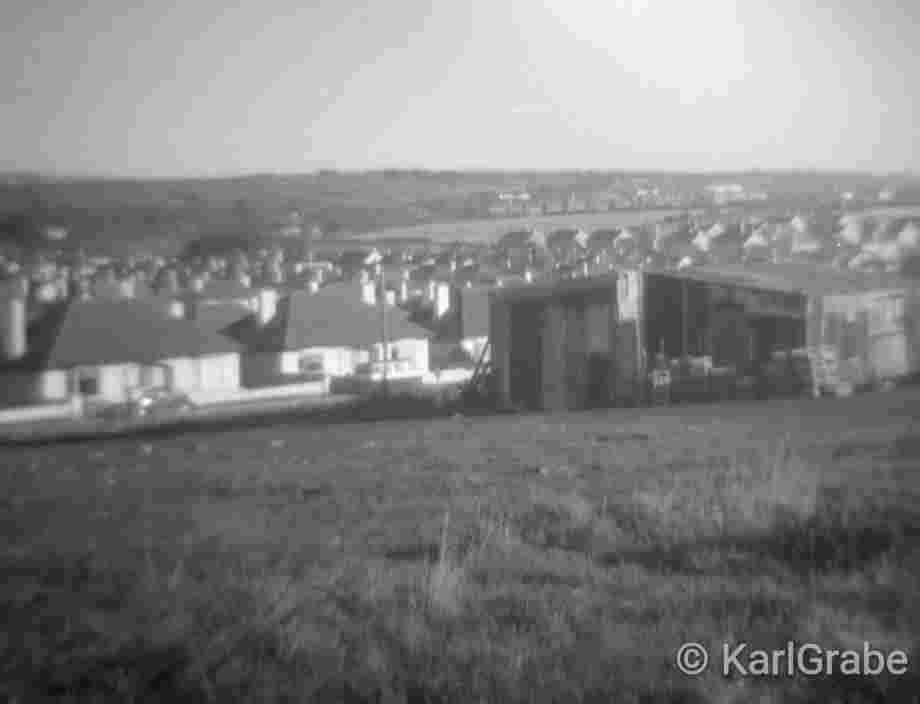 I also used a 1950’s Lordox 24×36 camera during the ‘70s, a camera my father passed onto me. Two of the photos in the exhibition, of the slide in Fitzgerald’s Park, were taken by Wolfgang using this camera. It was a proper camera and you had to use a separate light meter to set the exposure and shutter speed. Then in the early 1980’s I bought an Olympus OM10 SLR camera and most of my photos in the exhibition are taken with my OM10 with its standard 50mm lens or a Tamron 80-210mm zoom lens. 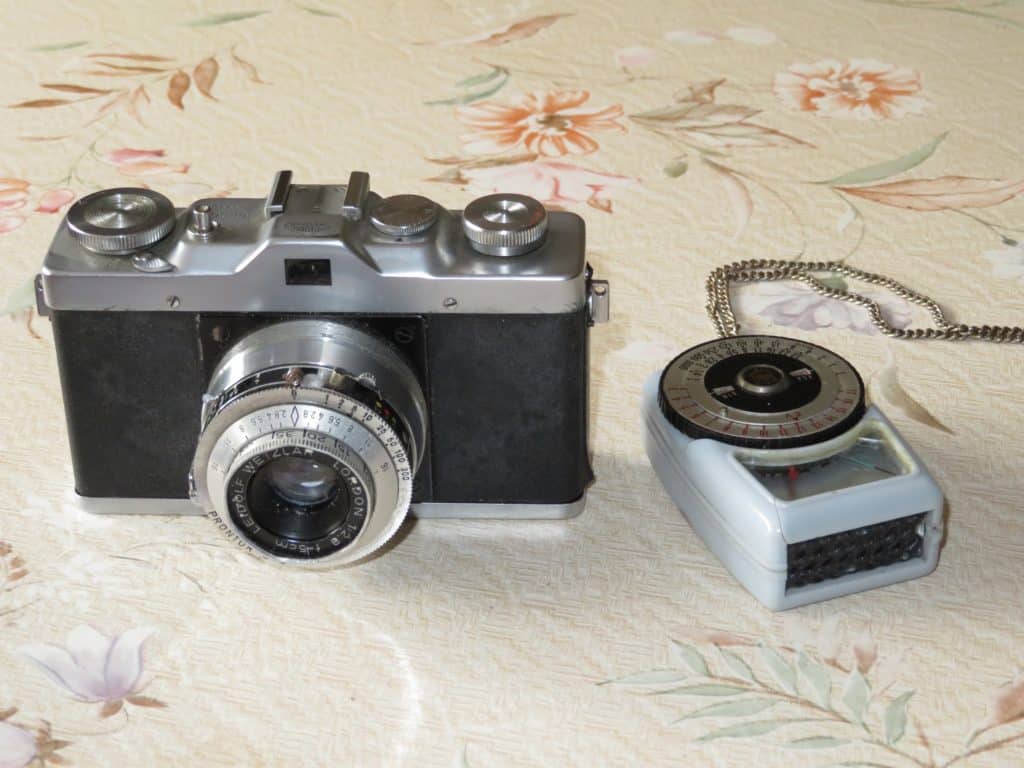 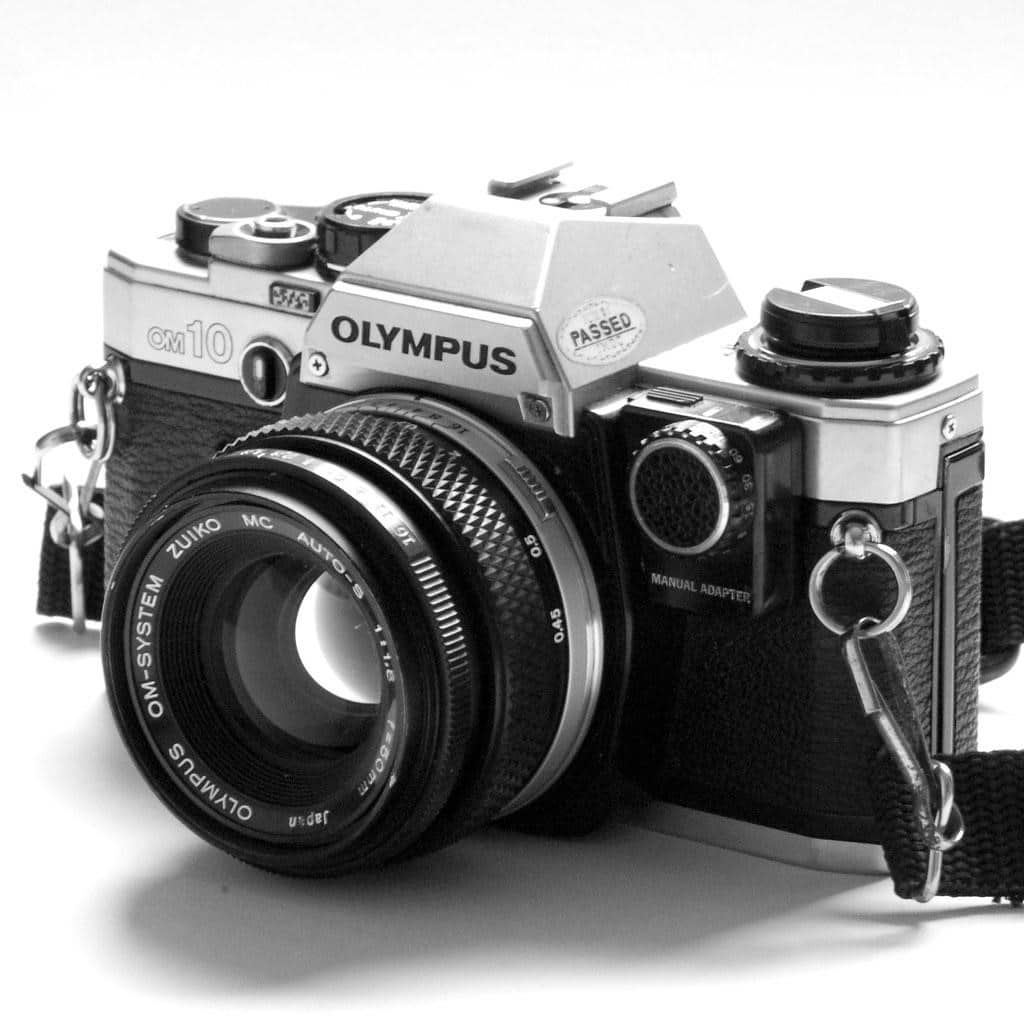 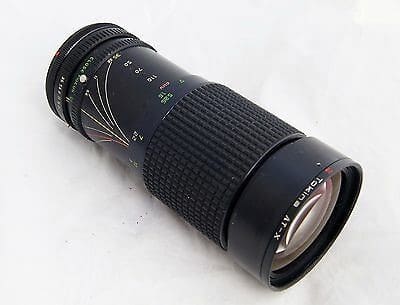 I mostly used colour negative film but also colour slide film. Slide film had the advantage that it cost less, as no prints were produced. However a slide projector and screen were needed to view them properly. It was also possible to develop slide film at home using a development tank and I did this for a number of films. This reduced the cost further combined with purchasing the slide film in bulk rolls. The rolls were cut into 36 exposure lengths and I inserted them into film cartridges.

The photos I took during the ‘80s were forgotten about in drawers and it was only around 2010 that I bought a film scanner in order to preserve them and view them on a computer.

However I also had many film negatives & prints from my father dating from the 1950s and so I started scanning these first. As I mentioned, two of Wolgang’s photos are in the exhibition – the two of the slide in Fitzgerald’s park with my younger brother.

I then continued scanning my own photos. Some of the slide film photos had never been put in slide mounts so I was seeing them enlarged for the first time! To date I’ve scanned about 25,000 photos, most of which are family pictures but many of Cork also.

My Photos in the Exhibition

Zoom lenses were particularly useful for taking candid photos of the characters on the Coal Quay. However it involved standing in the middle of the street and I would be quickly spotted by the sellers. So instead I would go along with a friend and pretend to be taking a picture of them and at the last minute, point the camera towards the people I was trying to photograph.

The Coal Quay was one of my favourite photo spots as it was part of the old Cork and I wanted to record it. I also liked taking old buildings especially those that I thought might be demolished. In particular Merchants Quay got my attention as the buildings there had been derelict for some time. In the middle of Merchants Quay was a hairdresser and we can just imagine the conversations with the customers while it was still in business. 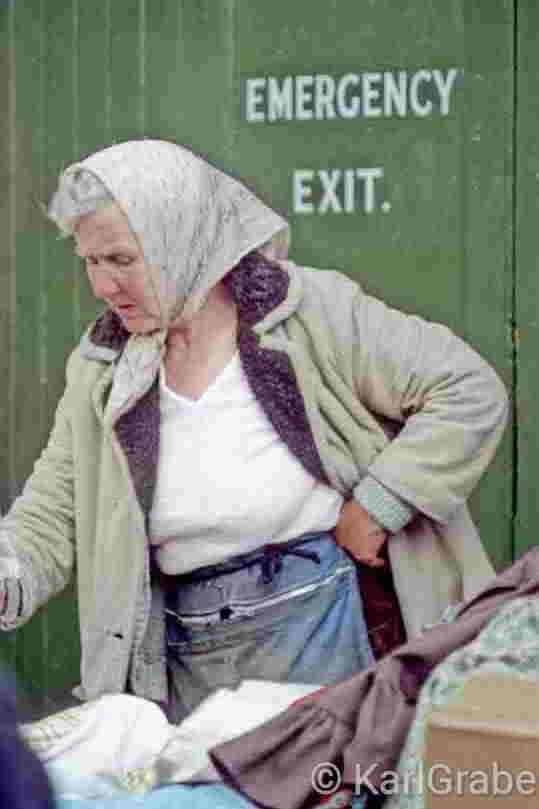 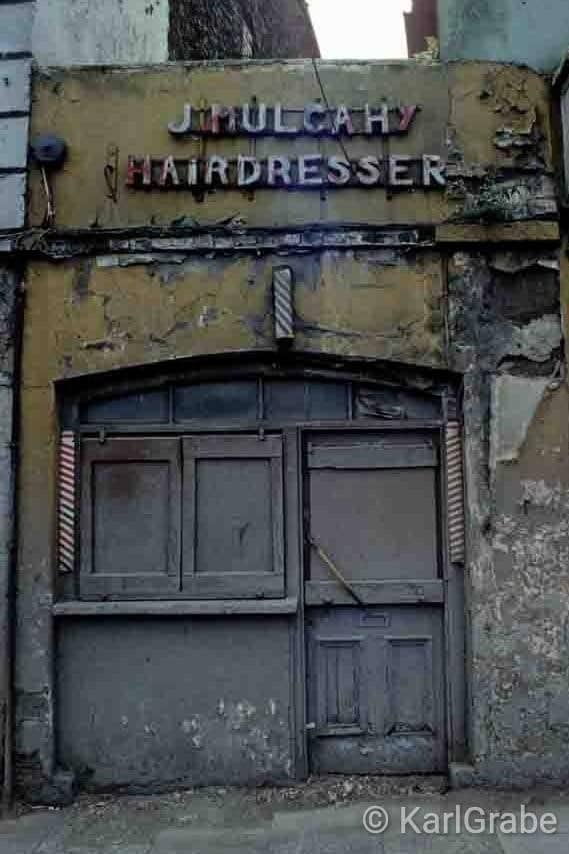 Patrick’s Hill was another one of my favourite places for taking photos and using a telephoto lens allowed me to capture a good section of Patrick’s street in one photo. I was using a Tamron 500mm mirror lens on Patrick’s hill when I spotted the 3 girls whose photo is in the exhibition. It wasn’t a zoom lens so it wasn’t going to be possible to recompose the picture as they approached. So I only had one shot at it. 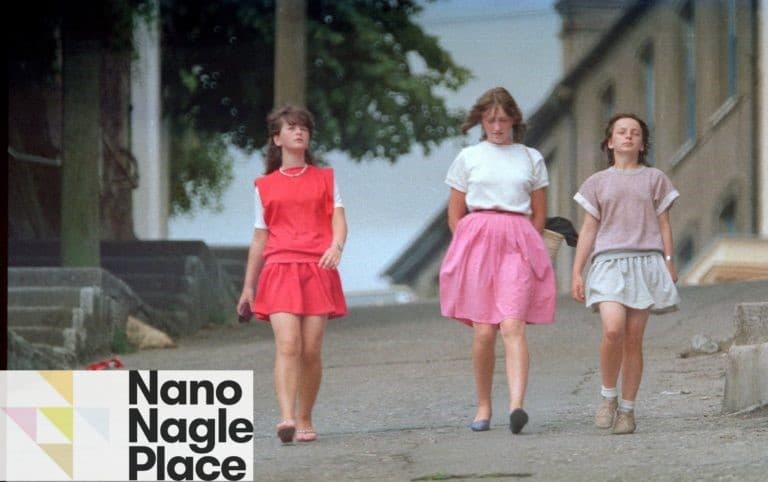 Patrick’s hill is at such a steep angle that the street itself formed part of the background helping the coloured clothing stand out even more.

I was working in Apple Computer Cork in Hollyhill from 1983.The facility then had a workforce of about 230. The plant was manufacturing the Apple IIe computer at the time. It was a home computer but at nearly IR£2000 with a screen and disks it wasn’t affordable by most cork families. However, Apple had a ‘loan to own’ scheme so all employees were given an Apple //e to take home. I’m sure many a Cork family became competent using computers because of this and perhaps helped Cork get started on the road to becoming Ireland’s Silicon Valley. These early computers weren’t very powerful of course, by comparison today’s smartphones are thousands of times more powerful and at a fraction of the cost. 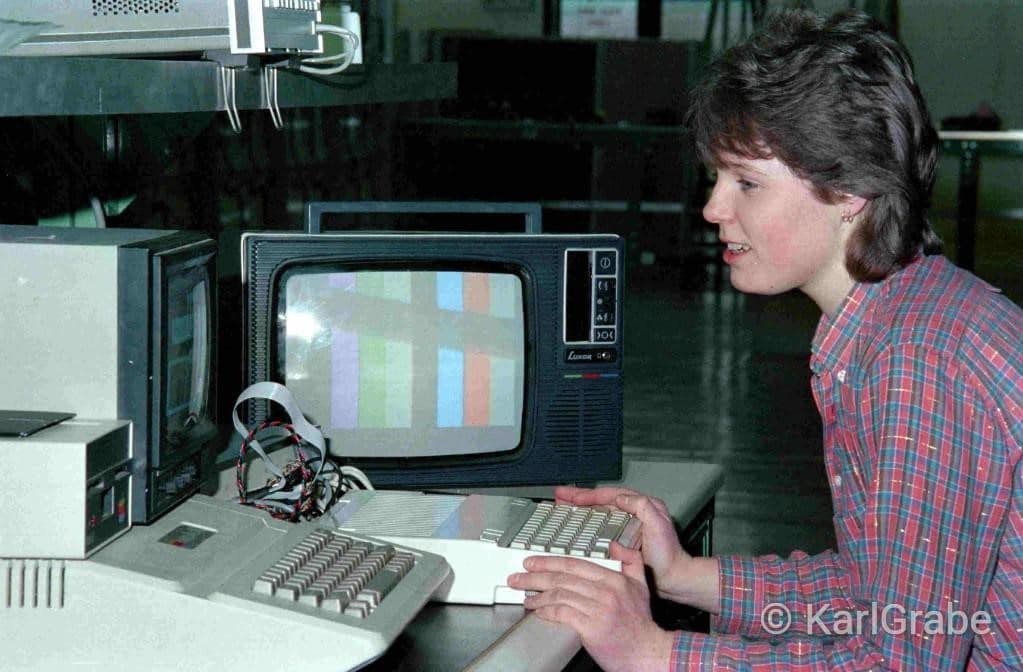 The photo in the exhibition is from 1984 when the then new, all white, Apple //c was first manufactured in Hollyhill. It was similar to the IIe, in the foreground, but was designed to be portable. The lady is testing a //c, checking things such as the keyboard keys, the built in diskette drive, correct colours on the monitor etc.

Photography has moved on considerably since my first 1969 plastic camera and now everyone, from primary school children upwards, has a digital camera in their smartphone. Smartphones take great detailed photos but there’s one thing missing – a zoom lens. Even though I have a digital SLR, I mostly use a pocket Canon SX720HS which has a 40x zoom lens.

Cork city is changing fast and I’ll still take pictures of Cork but also scenery and wildlife. Looking back at my ‘80s photos of the demolished Merchants Quay buildings I wonder if things have improved much when I see neglected buildings like the ones on North Main Street recently in the news. There are also flood relief plans that would see major disturbance to the historic quay walls. Hopefully we will see Cork modernise but keep as much of the old city as we can.