Since Nano Nagle Place has been closed, we have tried to bring some of our museum content into your home! These collection insights profile different object from our museum and archive, giving you some information you might not know! We’ve collated all of our collection insights and will be adding to this blog post in the coming weeks so make sure to follow us on Facebook and Instagram to stay up to date!

This beautiful key has quite an interesting history. For many years the key was thought to open the gate leading from Douglas Street into the convent grounds. This gate would have been quite symbolic to the Presentation Sisters as after profession, this was where novices said goodbye to their family. However the key was never actually tested in this lock!

A theory was put forward that perhaps the key opens the door to the 1771 convent door. The convent is the oldest building on our site, paid for and built to Nano Nagle’s specifications for the Ursuline Sisters whom she had organised to come from France in order to teach in her schools. The door is original to the convent, and although the keyhole on the outside of the door has been covered up over the years, on the inside of the heavy convent door is a large, very intricate lock.

Last August we decided to test our theory with conservator Karen Horton, and our archivist Sr Rosarie. Have a look at our video and see if our theory was correct!

This week to mark the anniversary of Nano’s death on the 26th April, we thought we would dive into one of the most important objects in our collection; Nano Nagle’s Bonnet.

The bonnet is made of cotton lawn, and was worn by Nano before her death in 1784. The convent records from the early 1780s describe the dress worn by Nano’s first sisters, the unenclosed ‘Society for Charitable Instruction of the Sacred Heart’, including Nano Nagle, wearing:
‘a black gown plainly made without fashion – over it they wore a black silk handkerchief crossed in front – a plain cap made round which fitted close to the head and a broad black ribbon bound tightly about the head. When going out to attend the schools they wore long mode cloaks, the hoods of which they always threw over the small black bonnets worn by them on these occasions.’ Nano’s bonnet isn’t exactly the same as it once was, in fact it would have been much longer than pictured, however parts of the cap have been snipped from each side of the headpiece to send to new Presentation convents opening around the world, and we aren’t sure how much! Thank you to conservator Karen Horton who made sure the bonnet impeccably preserved for future generations to see!

Today bonnet is located in the 1771 convent in our Artefacts Room. This room houses a living collection of objects of devotion to Nano Nagle, which was only fully locked behind glass in 2017! Each object has had a life of its own, each object has a personal connection to Nano and her convent. Once we reopen to the public, why not join our daily guided tours and see Nano’s bonnet along with the rest of our collection in our Heritage Centre!

We’re giving a different insight into our collection and looking to the stunning glass sculptures by Nano’s Tomb created by Eoin Turner. Anyone who has visited Nano Nagle Place has surely seen this amazing sculpture…but do you know the inspiration behind it?

In Eoin’s own words, he was inspired by “the history of Nano Nagle herself, the South Presentation order in general and its worldwide influence on education in society. With regards to the water element I used the 3 major locations throughout Nano’s life all linked to water; The Blackwater, The Seine in Paris and the Lee in Cork. Water of course is very much a spiritual significance in terms of it being a fundamental life-force. Water also comes into play in her travels. Nano traveling from Cork to the world, travel back then of course by sea and land to the furthest out reaches of the world. It is also site specific, water is used to create a harmonious and peaceful presence. So the element of water present within the work links to that physical element.” An amazing piece of sculpture which truly ties together Nano’s history, her influence and the space itself! We hope you visit the sculpture when we reopen and experience it for yourself! You can find more of Eoin’s work on his website: www.eointurner.uk/

Here we have a portrait of Nano’s father Garret Nagle. This portrait (artist unknown) is on display in our Artefacts Room and shows Garret Nagle (d. 1746) wearing a magnificent cobalt blue coat and standing in front of an open window. Behind Garret through the window, we can make out a body of water and a ship on the horizon. This ship is most likely a reference to Garret’s frequent journeys to the continent, for political business or trade.

Cork’s coastline and large natural harbor facilitated a lucrative business of smuggling contraband goods and passengers (indeed Nano and her sister Ann were smuggled on a cargo ship bound for France to receive further education). It also enabled the legitimate business of Munster Catholic merchants to flourish in trading overseas and members of the Nagles began to participate in maritime trade. Therefore we can understand from this portrait that Garret was involved in maritime trade.

An interesting thing to note is that this portrait was found within Joseph’s snuff box, possibly alluding to the fact that Joseph carried this portrait of his brother and had the ability to look at it when he missed him or after Garret had died. This also gives us an indication that these brothers were close, indeed after Garret’s death, Uncle Joseph supported Nano like a father, giving her support and money to keep her schools going and build the 1771 convent.

Nano set up seven schools which stretched across Cork city, one of those schools somewhere on Philpot Lane. Philpot Lane lies just off Shandon St and Nano would have walked there every day from Cove Lane (Douglas St) to visit each of her schools. After Nano’s death, Number 2 Philpot Lane became the first home of the North Presentation Sisters, and this was their front door!

The Sisters who moved in 1799 following their training in South Presentation, probably lived in the upstairs rooms in Philpot Lane. The ground floor accommodated the schoolroom for the children. Life was difficult: the Sisters were often penniless and in dire straits. Young women joined the Sisters, spaces were inadequate and Bishop Moylan assisted in finding space for a new convent and school. A site in Mallow Lane, (now Gerald Griffin Street) was acquired and more than 1,000 children attended the first enrollment in Mallow Lane.

The hatch/grill seen on the door was safety measure, necessary to ensure the one being admitted was a friend. Remember the Penal Laws were still in place, this hatch acts as an enduring relic of dangerous times when discovery of a Convent or Catholic school could bring severe retribution.

In the 1980’s the door was thrown into a skip on the street, ready to be brought to the local landfill site. Sr. Eucharia Buckley from North Presentation Convent saw it there and asked the builder if she could have it. He joked it would cost her €250 but very kindly donated it to her. It was kept in North Presentation convent for safekeeping where it remained in storage, until it was moved to the Nano Nagle Place museum!

The account book of Nano’s convent on Douglas Street, which she built between 1777-80, gives us a window on the stuff of everyday life and everyday expenses in eighteenth-century Cork. Each page constitutes around a year’s spending.

You will see that the greatest sums of money are spent on food. We are seeing a year’s worth of expenditure on food here, for a small convent with fewer than 15 occupants. In an age before mass production and mechanised farming, products like Meat, Bread, Butter, Fish and Eggs were expensive – the cost of meat for the year 1801-1802 of £84.5.3. equates to €7126.47 today.

Tea, sugar, pepper and mustard were imported luxury items, not yet the staples of every day life.

Coals were expensive too, but would have constituted the only means of heating the house and cooking. At the time of writing the sisters were in dire straits, with little financial support for their convent. Thus the candles they bought were most likely tallow candles rather than (less smelly and smoky) beeswax candles.

Several entries stand out as those of a convent with a mission to care for the poor. Wine and breads for the altar appear in the accounts, as do ‘Plaster and eye water for the poor’ and ‘wine and medicine for the sick’.

Wine and drink appear several times – drink may have been small beer, which many people would have drank as a staple of their diet. Wine, brandy and coffee also appear – these were expensive items, but only £3.10.0. is spent on them, suggesting very little was bought – since this equates to €296 in today’s money, which still wouldn’t procure very much wine, brandy and coffee!

Servants wages appear, which may seem surprising, but many of the sisters who joined Nano in her new religious congregation, and indeed Nano herself, were from an gentry backgrounds and would have had little idea of how to cook. The sisters were busy women, teaching in schools across the city as well as caring for the poor and sick, and observing their religious devotions. It would have been quite normal at the time that a convent or large household would have several servants.

Finally, the winding of the clock appears in the accounts. The annual cost of this weekly service may have been as much as £300 per year in today’s money. In may households, the clock would have been wound by a butler, suggesting that the sisters didn’t have a male servant of this rank. The clock that was wound is still wound once per week at Nano Nagle Place, and it chimes on the hour. A tangible link between Nano’s account book and Nano Nagle Place today. 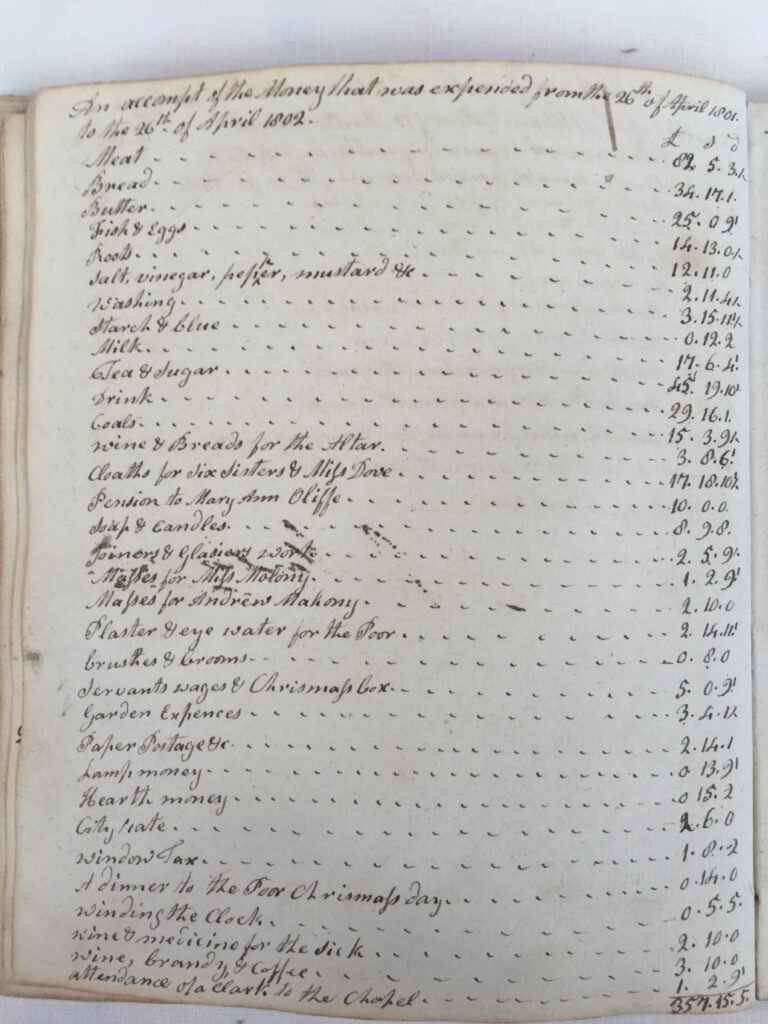 Back to What's On
Font Resize