Today we thought we’d take a closer look at Turner’s 1809 engraving of Nano Nagle, we’re sure many of you have seen this depiction of Nano Nagle before, but let’s dive a little deeper into its story! 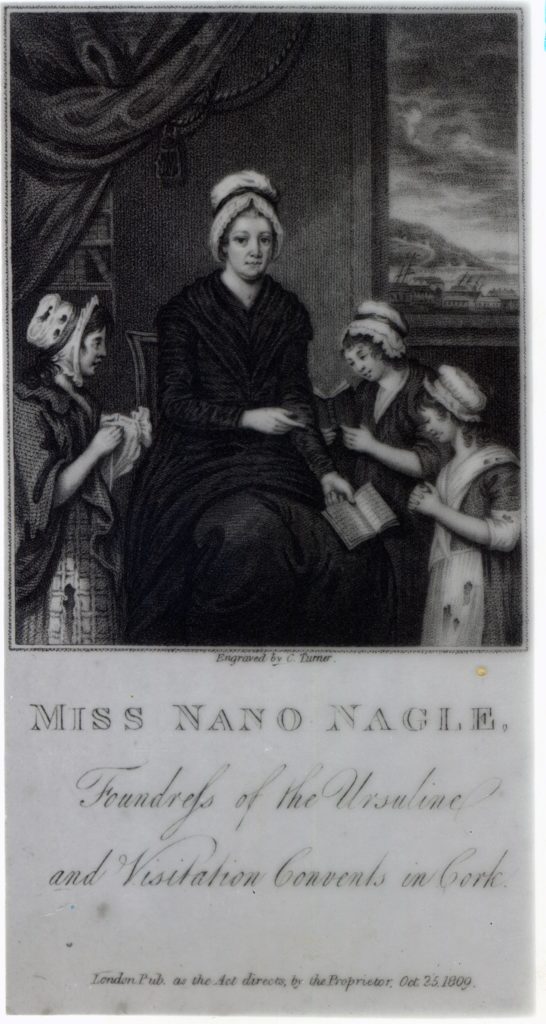 The artist was Charles Turner, who mainly worked through the medium of engraving and mezzotint. Born in 1774, Turner was a homebody, rarely leaving London, and in fact he never traveled outside of England. Born in Woodstock a small rural town in Oxfordshire, Turner chose to pursue art as a career. He began his studies in the Royal Academy at Somerset House, where he studied alongside JMW Turner (no relation) and George Dawe. He apprenticed to John Jones, who was proficient in stipple engravings and a master of mezzotint. It is believed this influenced Turner to pursue both media rather than the traditional craft of painting. He had a hugely successful career, working with esteemed artists, commissioned by publishers in Oxford, Dublin and Edinburgh. In 1828 he was elected as the Associate Engraver, of the Royal Academy of the Arts, a huge honour which recognized his contribution to the arts as well as his talent. Turner passed away in 1857 at the age of 83, leaving behind an enormous volume of work, including this stippled engraving of Nano Nagle.

This engraving, created in 1809, is based on a portrait of Nano Nagle, which we suspect has been lost. It depicts Nano Nagle surrounded by three young girls, all engrossed in different tasks. Nano has the central position in the image, and makes direct eye contact with the viewer as if momentarily distracted from her task. She is holding and pointing to a book, presumably a book of prayer or bible as the little girl kneeling by her side is praying. Behind Nano is a large window looking out onto a view of 18th Century Cork, visible are masts of ships, some buildings and the river Lee. A dark and swirling sky bears down on the landscape outside, perhaps signifying the oppressive Penal Laws which were a threat to all Irish Catholics in the 18th Century. Even in the small room where Nano is portrayed, she and the young girls are unsafe from this dark cloud of the Penal Laws.

The three girls portrayed in the image are representations of pupils in Nano’s secret schools. Nano was born in 1718, at the height of the Penal Laws, rules set out to control the Catholic majority living in Ireland. One of these laws was that Catholic children couldn’t receive an education in a Catholic school and Catholic adults couldn’t teach in or run schools. Some Catholics found a way around this by receiving instruction in Hedge Schools or if they were extremely lucky (like Nano Nagle), were smuggled out of Ireland and educated in Europe (another law forbade travelling abroad to receive a Catholic education). However, those poor Catholics who lived in densely populated cities, like Cork, didn’t have these option, and remained uneducated and oppressed by these laws. 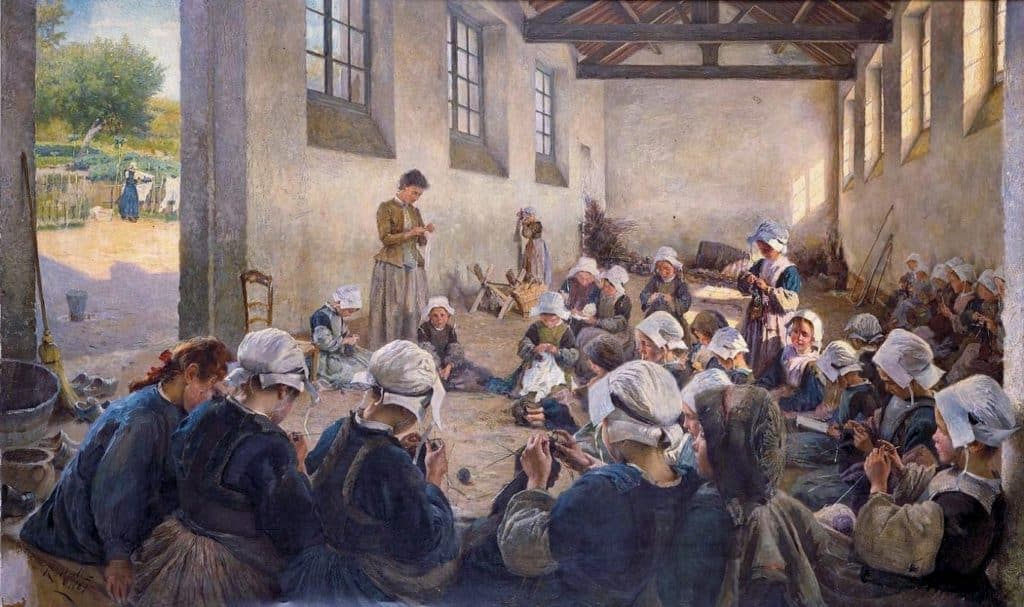 Nano returned to Cork after receiving an education abroad and used her knowledge and her inherited wealth to set up seven Catholic schools across Cork city centre. Of course under the Penal Law, this undertaking was completely illegal. Nano could have been jailed. Nano began her first school in a small room behind a bakery in Cove Lane (now known as Douglas Street). She hired a teacher to teach basic reading, writing and arithmetic and had a servant gather young girls in the surrounding areas and bring them to the makeshift school. Nano taught the girls religious catechism and prepared them for life after school by teaching the girls how to sew, this way they could get jobs after their schooling. Nano began teaching young girls, as there would have been fewer opportunities for females at this time, however she later went on to open two schools for boys.

Back to Turner’s image, we can imply that the engraving is referring to Nano’s first schools as only girls are represented. An interesting detail one might miss in the background is a bookshelf, half covered by a large, somewhat extravagant curtain, meant to distract from the hidden books. This secret bookshelf signifies the secret learning taking place in Nano’s schools, with the cloud outside the window a consistent reminder to the viewer of why this covert learning was necessary. 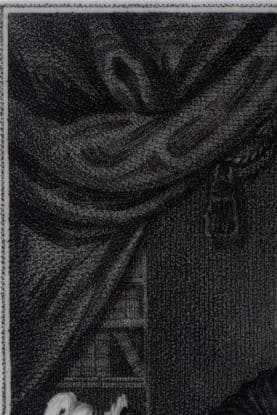 Nano’s students are all undertaking activities which refer directly to Nano’s school. The girl closest to the window is reading a book, next to her is a girl who is kneeling and praying being instructed by Nano, the last girl is learning how to sew. Of course each of these subjects were taught in Nano’s schools, showing the artist was familiar with Nano’s schools and the instruction the children received. A final detail relating to Nano’s students are the conditions of their clothes. We can see there are holes in their dresses, aprons and even one of the girl’s bonnets (perhaps she is sewing a new one for herself). Their ragged clothes representing their status in society as impoverished Catholic children, who have no access to education, other than Nano’s secret schools.

Nano’s clothing on the other hand, is neat but practical, perhaps a nod to her vocation as educator and religious Sister. The convent records from the early 1780s describe the dress worn by Nano Nagle and the first sisters of the unenclosed ‘Society for Charitable Instruction of the Sacred Heart’ as:

“A black gown plainly made without fashion – over it they wore a black silk handkerchief crossed in front – a plain cap made round which fitted close to the head and a broad black ribbon bound tightly about the head. When going out to attend the schools they wore long mode cloaks, the hoods of which they always threw over the small black bonnets worn by them on these occasions.”

The engraving shows Nano wearing this exact uniform, Nano’s bonnet remains in our collection and has been carefully conserved. You can learn more about the history behind Nano’s bonnet here!

Over Nano’s shoulder is a window looking onto a view of a bustling Cork city centre. Visible through the window are some 18th Century buildings and ship masts which draw our eyes to the river, the beating heart of Cork city. Of course in the 18th Century, Cork was a merchant city, our large natural harbour was ideal for importing and exporting good across the world 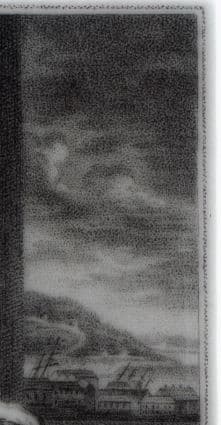 At this time St Patricks’ Street as we know it today, was a river which ships would use to drop their goods at the Customs House (now the Crawford Art Gallery). Of course Cork was best known for shipping goods like salted beef, butter and tallow and hides during the 18th Century. The scene depicted outside Nano’s room would have been a common site in Cork, especially during the autumn months when the port was at its busiest.

View of Cork, John Butts, 1760, Colourized version made for the museum at Nano Nagle Place

However while Turner’s engraving shows Cork as a merchant city, there are other replicas of this image whose major difference is view outside the room. The painting below, attributed to John O’Keeffe (in the Crawford Art Gallery’s collection), is believed to be based on Turner’s engraving. The composition is much the same, with Nano as the central figure and instructing her young students. There are some noticeable differences, the first being the girl’s clothing which is much neater and far less ragged than Turner’s depiction. The room itself is plainer, with the secret bookshelf another missing feature to O’Keeffe’s painting. However the biggest difference between the two images is the room’s view. Instead of the reference to Cork as a centre of merchant trade, we see instead the connection to Cork’s medieval history with the 14th century bell tower of Red Abbey in full view. This view, is perhaps more accurate than Turner’s engraving, as it locates the room on Douglas Street, where Nano had her first secret school, fronted by a bakery. We are most likely being shown the interior of South Presentation Convent, where Nano founded the Presentation Sisters. 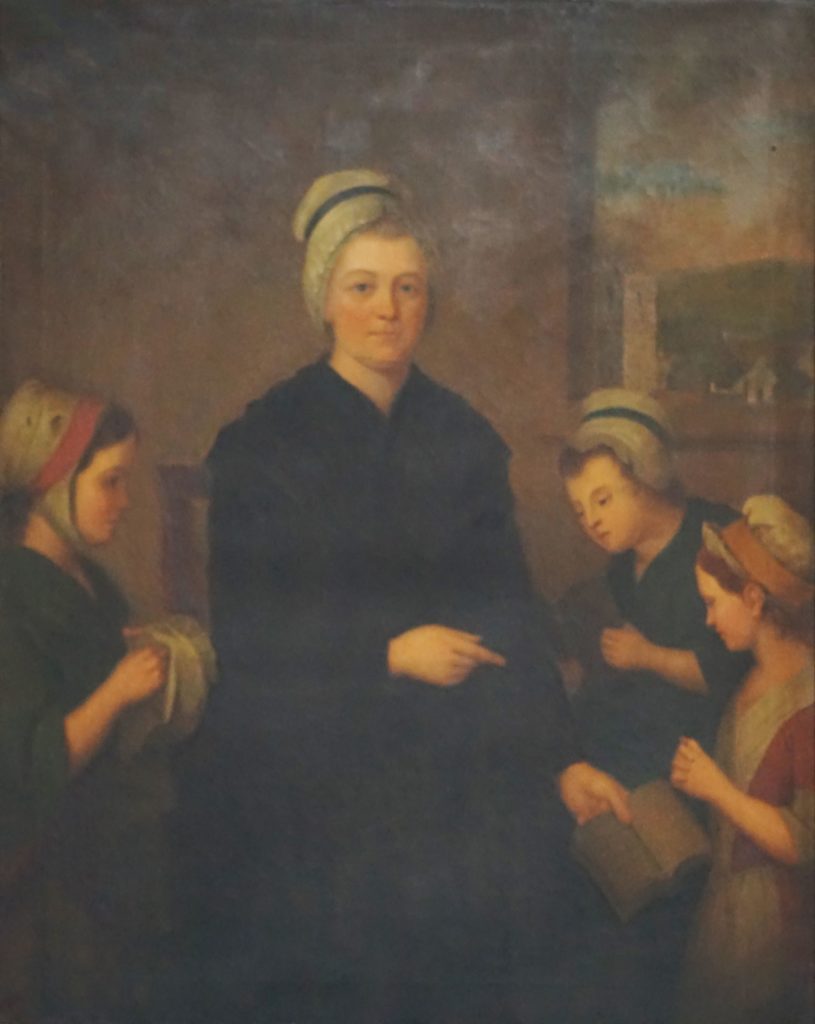 Nano Nagle and Pupils, attributed to John O’Keeffe, Purchased, with assistance from the Friends of the Crawford Gallery and the Presentation Community, 1990

Thanks to Turner’s engraving and O’Keeffe’s painting, this iconic scene of Nano lives on. Although there are still many questions surrounding the artwork; what happened to the original portrait? Who was the artist? Why was ‘Visitation Convents’ written rather than Presentation Convents? Who commissioned Turner to create this engraving? This image has a fascinating history which I’m sure will continue to puzzle us for many years to come!