This year we are bringing Nano Nagle back to school with a drama workshop that will travel to four Cork City schools in November. The performances are funded by Creative Ireland.

The school drama, created by Ocean of Notions Theatre Company, is based on archival research and interviews with many Presentation Sisters over the past four months. This intensive research work is building toward a new piece of drama for adults, funded via the Artist in the Community Scheme.

At the core of the performance is presenting an authentic Nano based on primary research.

This authenticity will extend to Nano’s costume. We are lucky enough to have a description of Nano by Mary, a travelling companion of Teresa Mulally. Teresa and Nano had corresponded about education. Mary and Teresa travelled from Dublin to Cork to meet Nano in 1778. Mary describes:

The first morning at 6 o’clock entered a little elderly woman with a shabby silk cloak and old hat turned up before, a soiled dark cotton gown and a coarse black petticoat, drabbled halfway and dripping wet for it had rained heavily…she announced her name to be Nagle

Our costume designer, Joan Hickson, has sourced fabrics that match this description. Silk for the cloak, and cotton for the gown. We may opt for a linen petticoat as wool would be hot under stage lighting.

The convent records from the early 1780s describe the dress worn by Nano’s first sisters, the unenclosed ‘Society for Charitable Instruction of the Sacred Heart’, including Nano Nagle, wearing

‘a black gown plainly made without fashion – over it they wore a black silk handkerchief crossed in front – a plain cap made round which fitted close to the head and a broad black ribbon bound tightly about the head. When going out to attend the schools they wore long mode cloaks, the hoods of which they always threw over the small black bonnets worn by them on these occasions.’

This outfit seems to be that represented in Charles Turner’s 1809 engraving of Nano shown below, made after a now lost portrait (of which more another day!). 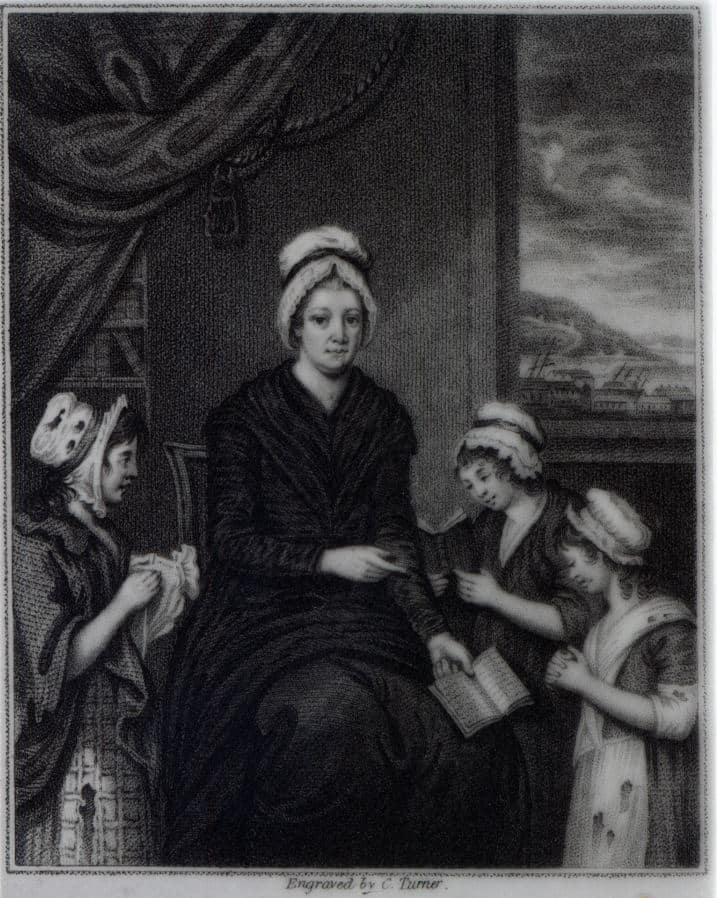 We hope to achieve a similar dress, with a crossed black silk handkerchief at the front as shown here. We will also add a placket of cotton lawn or muslin crossed across the neck and tucked into the front neckline of the bodice as is shown in the below portrait, which is believed to have been painted of Nano from life. (We are less sure of what to make of the red wrap or shawl shown in the portrait!). Image courtesy of National Portrait Gallery, London. 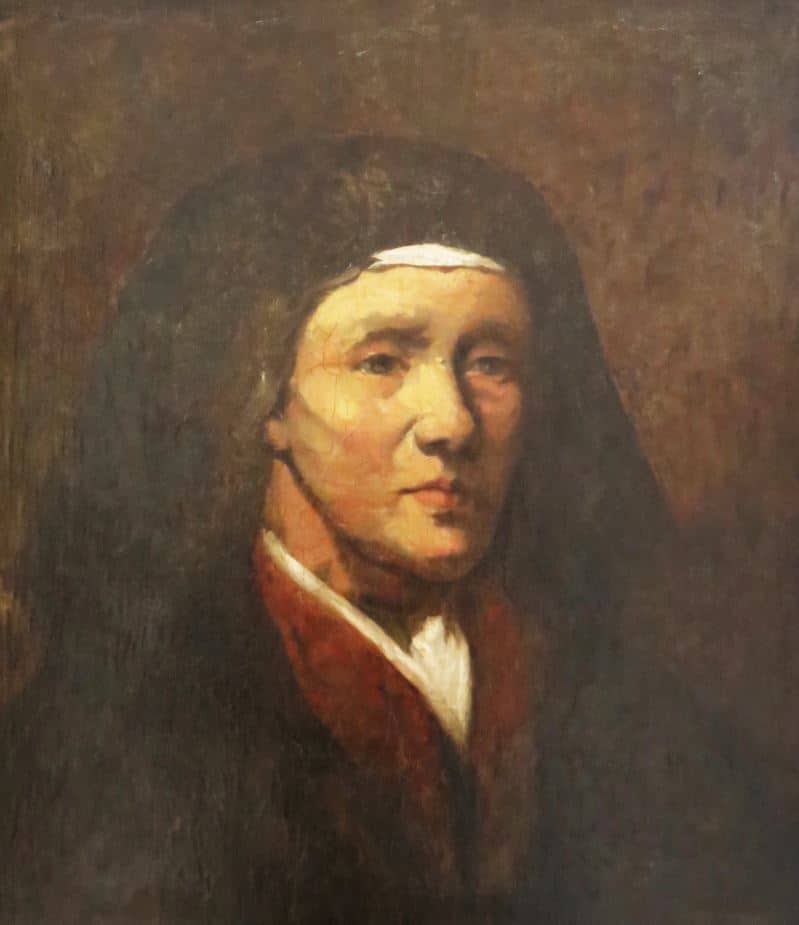 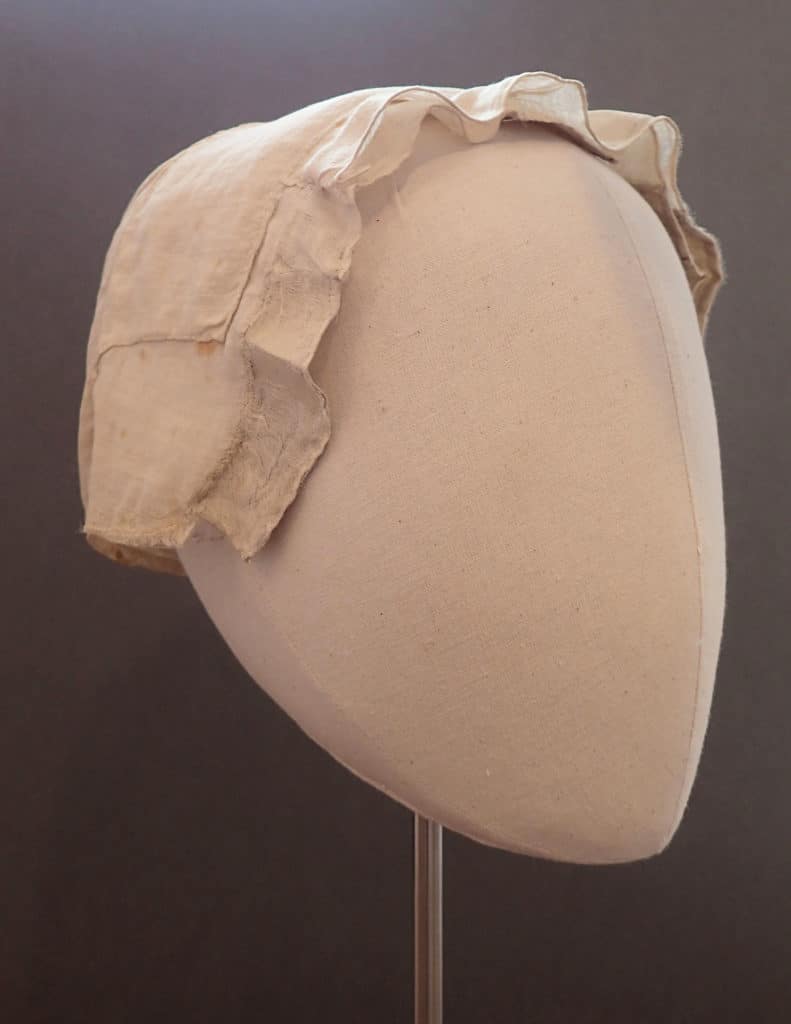 Before we get deeply immersed in bonnets, here is some bonnet terminology – the caul: the back bit that covers the hair, the headpiece: the band that goes across the top of the head, the ruffle: the front frilly bit, lappet: an extension of the headpiece (and sometimes the ruffle) beyond the earlobe. Nano’s bonnet isn’t exactly the same as it once was, as bits have been snipped from each side of the headpiece to send to new Presentation convents, and we aren’t sure how much. Thank you to Karen Horton for allowing use of this image, a working image taken during conservation.)

Here are photos of Nano’s bonnet. Joan is measuring it and Freda, our volunteer,  is admiring it!

Having the original bonnet leads us to raise some questions about later representations of Nano and her bonnet. Looking closely at the 1809 Turner image, how do you read that central n-shape in the ruffle –  as a n-shaped gap? Or as a part of the double ruffle that is curving up and down steeply at the apex of the curve around the head? 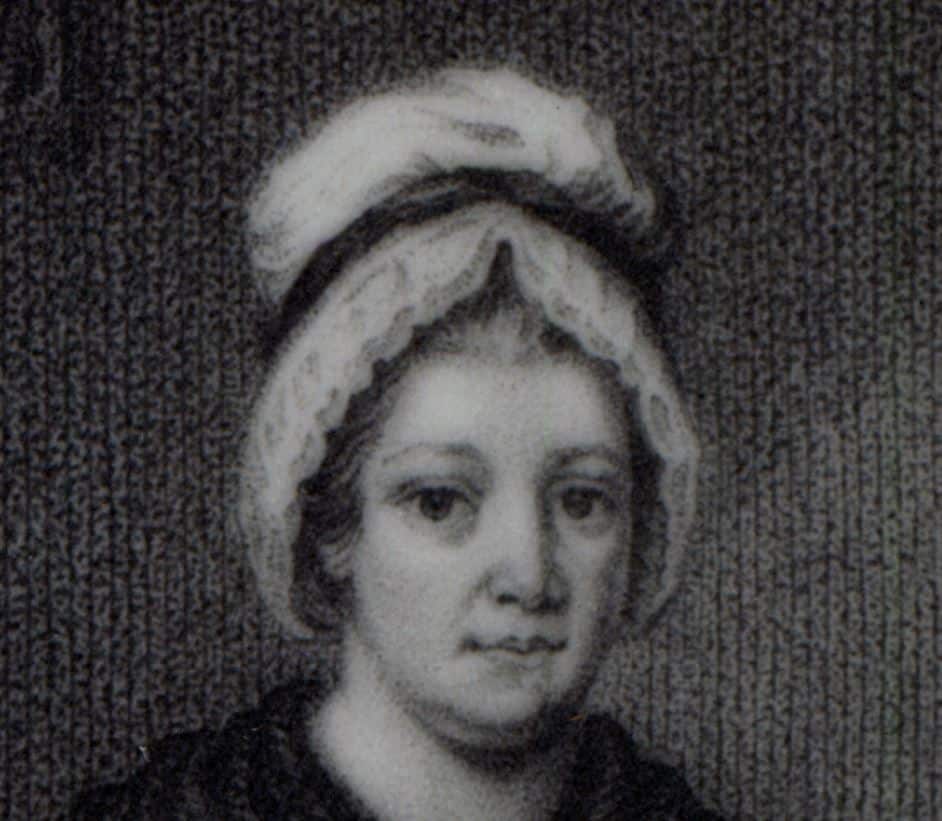 Many people have read the top of the frill as an n-shaped gap where the fabric of the ruffle tapers into the central headpiece at the top of the forehead. Look at this image gallery of examples:

We need to go back to primary sources. We have an actual example of her bonnet, we have the painting we believe is from life, which shows a small touch of white, most likely the ruffle of her bonnet, under the hood of the cloak Nano wears. Nano has no lappets coming down the sides of her face and nothing tied under her chin. If fabric was snipped from the sides of the headpiece of the original bonnet, it was only small snips.

Lots more research is needed to see if bonnets with a central divide in the ruffle existed. Thankfully one fabulous scholar, Sherri Saines, has spent years looking at surviving 18th-century bonnets in America. Her blog https://capalog.blog/ is a mine of information, photographs of original bonnets and Sherri’s attempts to recreate them using traditional fabrics and methods. Her research has thrown up no such bonnet with the divided ruffle.

Could it be that a flamboyant ripple of ruffle in the Turner engraving has given rise to Nano being depicted wearing a very different bonnet from the one she really wore? For our drama performances we are going back to the primary source, the beautiful cotton bonnet saved by the sisters because it truly belong to Nano.